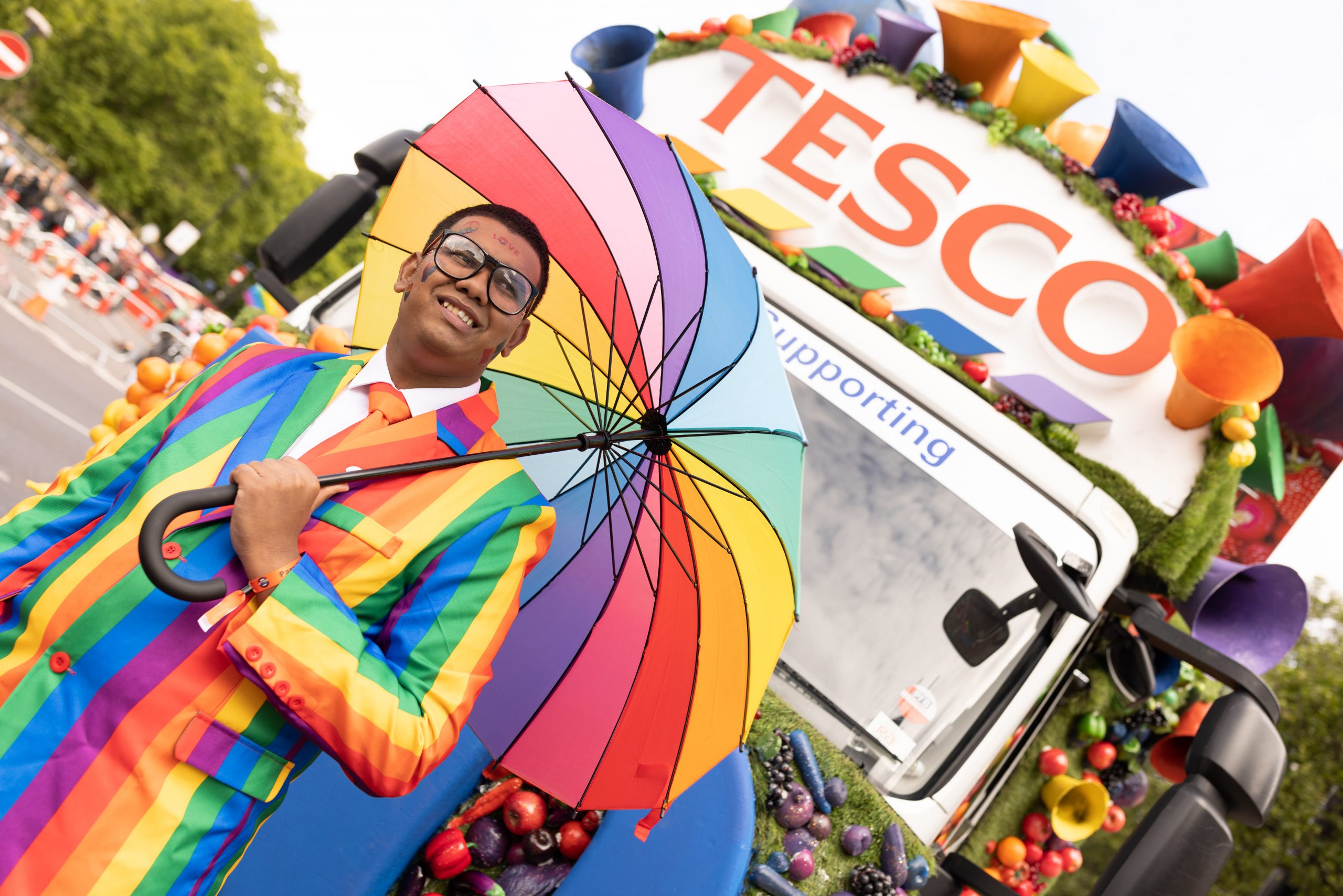 Our Experience At Pride In London 2022

The day we had been working towards – 2nd July, the Pride in London 2022 event, had finally arrived.

I have to admit that getting up at 4.30am on that Saturday morning, to head into the capital wasn’t the easiest start to the day, but as I sat on the 5.32am train to London and the mist started to lift, to reveal what promised to be a gloriously sunny day, the excitement started to grow. 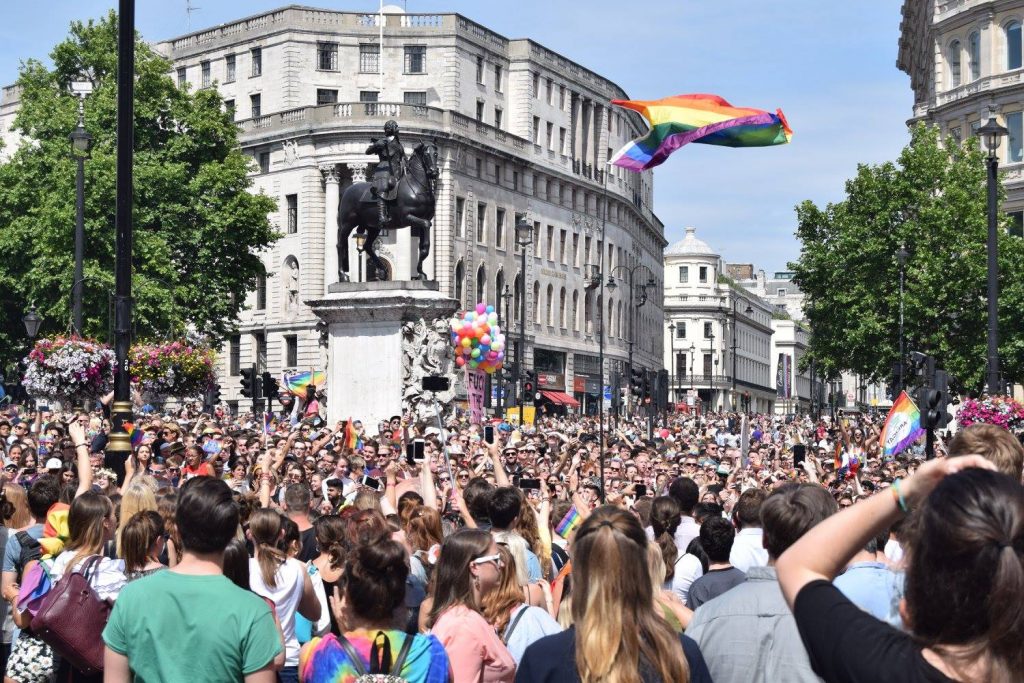 We had produced the largest number of floats of any company in the Pride in London parade this year, from Tesco, John Lewis, Amazon and Microsoft, to the Pride Organiser’s, Major of London and Civil Service’s power floats. With over 40 of our staff soon to be heading to the event, the logistics needed to run like clockwork. This year’s running order meant that 7 of the first 10 floats in the parade had been created by us, so we needed most of the team at Park Lane by 7am at the latest.

Our team of drivers had carefully delivered the parade floats to London the day before and all of the floats had been securely stored, (with their own private security guard!) to make 100% certain no harm came to them before they were presented to the clients the following morning. The only float that didn’t stay with the others was our Interactive Showcase Float with programmable LED display screens. We had created this for the Gay Gooners (Arsenal supporters’ club) and the vehicle had been fully wrapped in their own creative and branding. The float headed straight to the Arsenal football club’s training ground to be met by the coach and some of the players for a photo shoot. The bus went down a storm and the excitement and anticipation of what they would be able to experience at the Pride event the following day was palpable.

Our AV team worked through the night, fitting and checking the sound systems to ensure that all of the participants would be able to play their favourite tracks and really participate in the carnival atmosphere of the parade.

Getting all of the floats to the Pride parade meeting point on Park Lane, in the right order, at the right time was a logistical feat in itself. Each float had a designated driving team and each team were given a precise time to collect their vehicles and head to the event, with a strict entry time for every vehicle.

The Pride in London organisers had been very specific with the criteria each float had to meet, from the decorations permitted and overall height and length, to the vehicles meeting the London Ultra Low Emission Zone specifications. Each vehicle had to be pre-registered, as did every driver. Every driver needed a mate, (as a safety measure and extra pair of eyes) and driving licences and full names and addresses had to be provided for everyone, so that every team member could be security checked. Each client had to have a certain number of wheel stewards, whom we needed to meet earlier in the morning, prior to the walkers congregating at their individual floats before the float set off on the parade route. 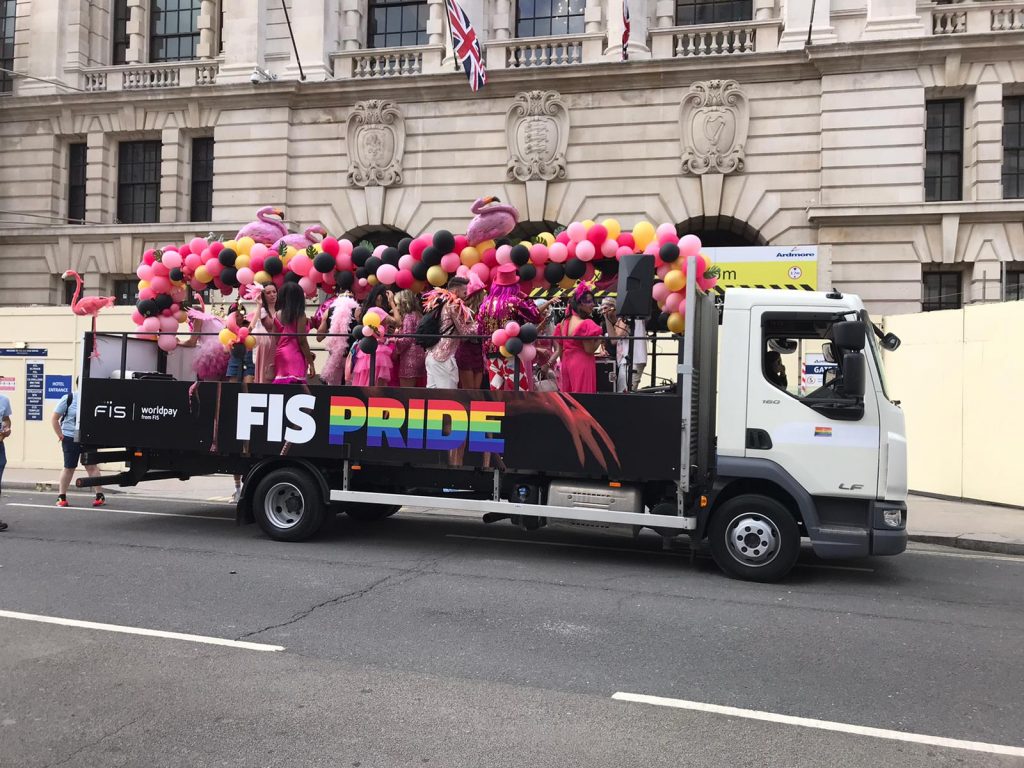 Thanks to the efficiency of our team, every ‘T’ had been crossed and every ‘I’ had been dotted prior to the Parade day, so every single one of our Pride floats sailed into the line-up area, on time, fully compliant and ready to roll.

Given the elaborate, creative designs of some of the floats, a number needed to be completed in situ, as driving through London with giant fruits and vegetables springing from the vehicle, or 400 balloons waving in the wind was understandably not an option.

The first float in the parade was the Pride organisers’ power float – a celebration of 50 years of the Gay Liberation Front. Our sustainable balloon partner company sent their most talented team and worked on a number of our floats during the morning. For the Pride in London float they made two fabulous, golden ‘50’ balloon structures, which were attached to each side of the float. As some of the guests from the Gay Liberation Front are now in their 80s, we also fitted seating on this vehicle so they had the ability to sit down should they need to. The energy and carnival atmosphere of the parade meant the seating wasn’t needed as much as anticipated however! The Major of London (whose float we also manufactured)  greeted members of the crowd and said a few words about the importance of Pride In London to the city and the community. 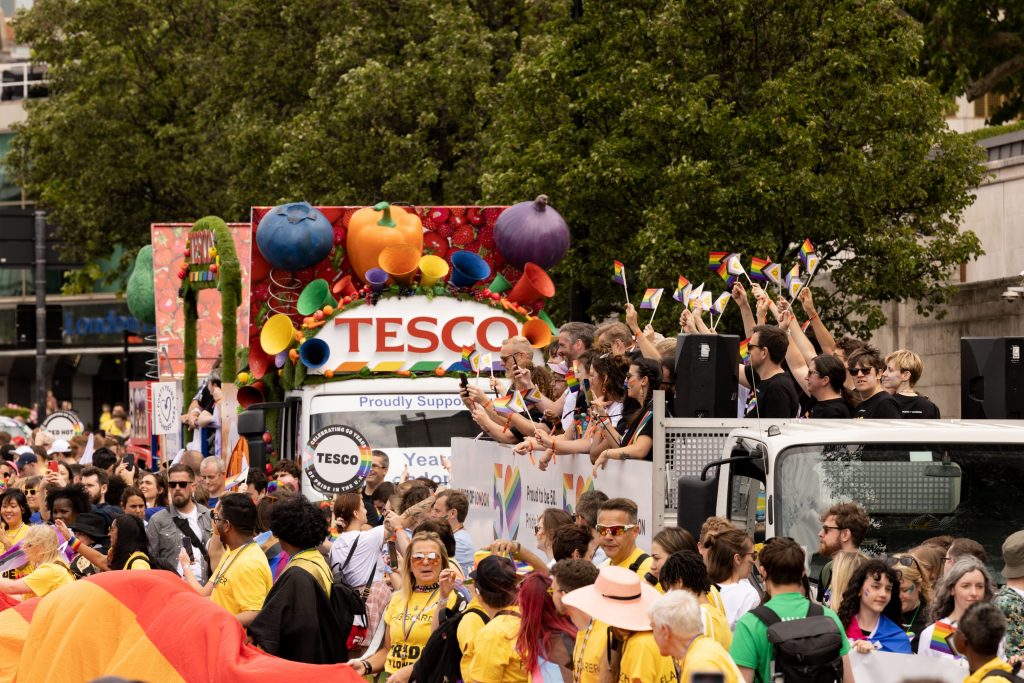 Tesco’s float was undoubtedly one of the most complex and required all the skills of our excellent creative team. ‘Bursting with Pride’ was the concept, and we were tasked with creating a float strewn with fruits and vegetables, along with 2 boxes, one for a DJ and the other for their performance acts to jump out of. As the lids opened along the parade route, giant fruits and vegetables sprung from the boxes. The end result was truly outstanding and footage of this parade float was shown as far and wide as Australia and Barbados, a real achievement and PR success for all involved.

Microsoft was one of the most original floats in this year’s parade. Sustainability and protecting the environment is becoming more and more important to both our company and our clients and we really believe we helped create one of the most environmentally friendly floats in the parade for Microsoft this year – a trailer, covered in sustainable and re-usable inflatables, pulled by a hybrid vehicle (wrapped in an eye-catching rainbow design), drew gasps from the crowd and was unlike anything else we saw on the day. This has given us confidence to push forward in 2023, when we will be offering clients the option to choose more sustainable solutions.

Cisco’s float was so vibrant and colourful, with a huge rainbow balloon garland from front to back. Their DJ really got the party started, dressed in a flowing, gold-lamé jacket, he got the disco music blaring out in the parade formation line, at least 2 hours before the parade even started. The growing crowds loved it and the carnival atmosphere was building as each moment passed.

Worldpay’s ‘Opulent Flamingo’ Pride float looked fantastic, from pink flamingos looking out from the back of the float, to an amazing balloon garland, covered with pink, gold and black balloons, interspersed with even more flamingos.

John Lewis’ float set off with the disco music playing, rainbow flags blowing in the wind and their vehicle fully branded with their ubiquitous and instantly recognisable rainbow graphic.

Our artwork department pulled out all of the stops this year, printing more than 100 graphics and fitting them expertly onto float after float, in a conveyor belt operation that ran like clockwork.

I can’t say the parade was completely without a couple of hiccups; one or two of the sound systems needed last minute adjustments from our on-site AV team and we even had a generator that decided not to work literally a few minutes before the float it was on was due to depart, but some quick thinking, nifty driving and two strong members of our technical team saw it quickly replaced with one of our back up generators within metres of the start line and the partying clients headed onto the Parade route, disco tunes pumping out, with not a care in the world. 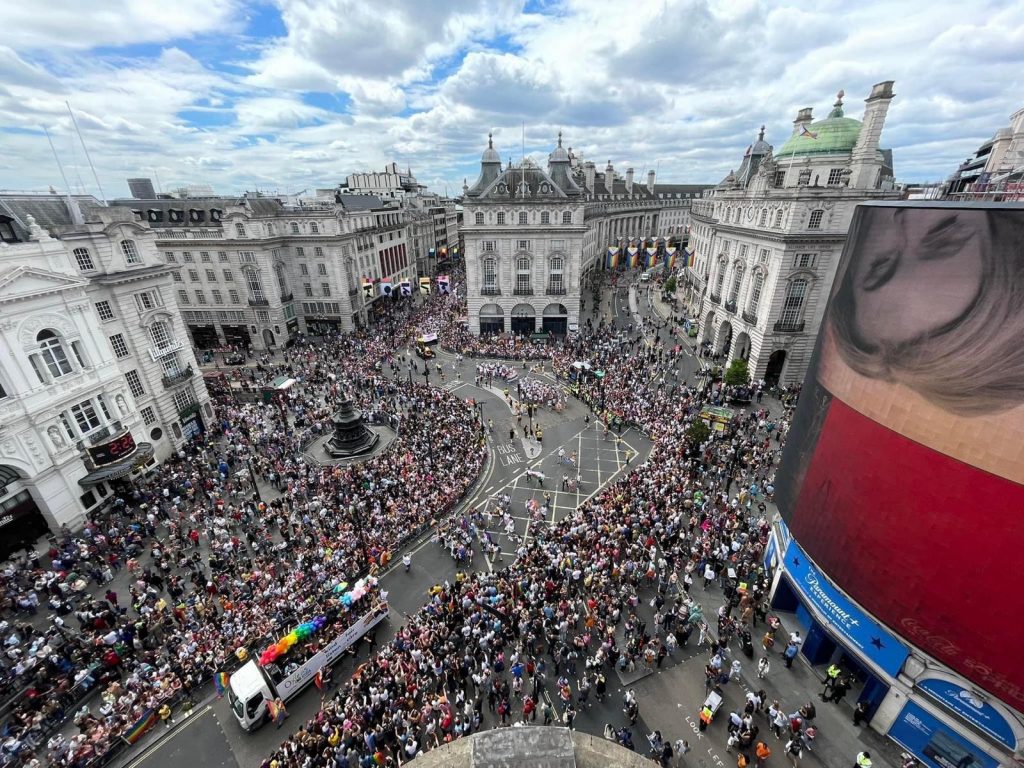 The weather played its part for Pride in London, with the sun shining on us throughout the whole of the day, adding to the general sense of happiness that pervaded everything. The atmosphere was fantastic, with people from all backgrounds and all walks of life, dressed in a variety of wild and wonderful outfits, expressing their individuality, celebrating with each other, and clearly revelling in and enjoying the event.

As the event drew to a close and our weary team began to de-rig each float as it completed its route, the sense of achievement and satisfaction we all felt was immense. Running up and down Park Lane all day, dealing with client queries and making sure every float was absolutely perfect had definitely taken it out of us (and meant we’d all broken our daily step records by quite some margin)! We had however delivered the most number of floats of any company at Pride in London, had the privilege of meeting countless delighted clients and had witnessed the sheer joy as they boarded their floats and headed out into the celebrations. A real success for The Clear Idea, the Pride in London organisers and all involved.