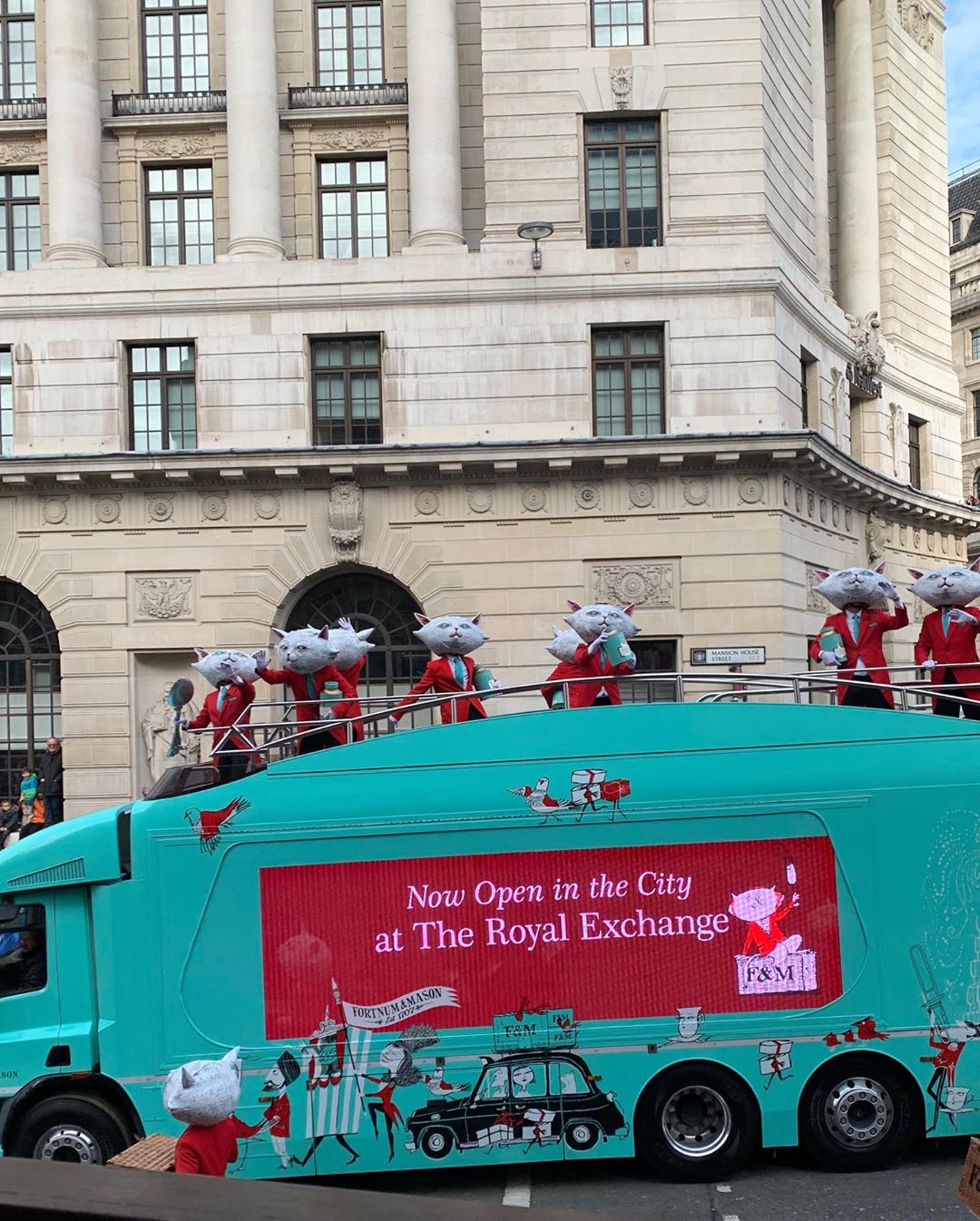 The fully wrapped vehicle was a cut above the rest and it even carried the new Lord Mayor of London on board (William Russell recently became the 692nd Lord Mayor of London if you’re interested). Their float also featured the iconic F&M dancing cats atop their parade vehicle.

The event was planned through the lovely people at 22×43 Creative in London.

Fortnum & Mason has twice-marched in the Lord Mayor’s show: first in 2007 as part of its tercentenary celebrations, and later in 2012 during the Diamond Jubilee. This year, Fortnum’s joined the procession once again to mark the opening of its new store and restaurant in The Royal Exchange, with a megawatt tea party compered by a herd of dancing cats. Fortnum’s famous felines representing the retailer’s esteemed Red Coat staff; a recurrent motif that were first introduced by illustrator Edward Bawden in the 1950s, and have been making themselves comfortable in 181 Piccadilly ever since.

Ewan Venters, CEO said: ‘As we prepare to celebrate our first birthday at The Royal Exchange we are thrilled to once again take part in the Lord Mayor’s Show, one of London’s most longstanding traditions. No strangers to pomp and ceremony ourselves, this year we’ll be marking the occasion in true Fortnum’s style: with tea, cake and cats.’

FORTNUM’S DOING IT WITH STYLE AS ALWAYS

About The Fortum & Mason Parade Float

The float is 11.5m long and has integrated LED screens on both sides of the vehicle. The screens are 5m long x 1.5m high and are powered by the vehicle’s on board generator. In additional to the lower deck that holds the screens there is also a drop down ladder that comes from the ceiling of the vehicle to allow passengers to access the top deck.

The upper deck of the vehicle is licenced to carry up to 60 passengers on board and passengers are kept safe with the hydraulic handrails which are deployed with the push of a button. The vehicle was due to be used by Chelsea FC for their Premier League trophy parade around the streets of the Chelsea borough in May 2017. Unfortunately, the event coincided with the tragic events in Manchester at the Ariana Grande concert and it was deemed too dangerous to continue with the planned trophy tour and it was cancelled the day before the schedule event.

“Dear The Clear Idea Team, just a quick note to say a big thank you for yesterday, Fortnum & Mason were thrilled with their entry for the Lord Mayors Show, so a huge success all around. I think we had the best commercial entry by far out all of the other brands taking part.

Can you please pass on my thanks to our two Drivers, Laurence and Mike, they were great. Once again, many thanks.

Is your brand looking for a high-quality parade vehicle? Get in touch with a member of our team today at 0203 191 6200 for more information!